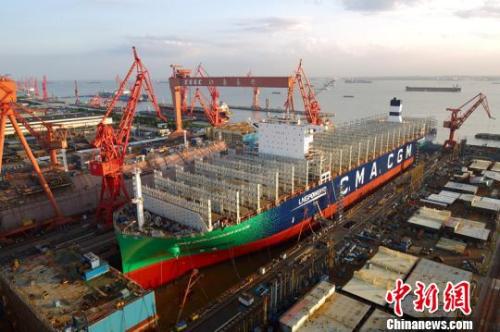 A LNG-powered ship enters the water in Shanghai. (Photo by Yao Feng / For China Daily)

Approved by the CPC Central Committee and the State Council, the merger creates the largest shipbuilder in the world.

The new corporation runs 147 research institutes, enterprises, and listed subsidiaries, with total assets worth 790 billion yuan ($112 bln) and a staff of 310,000 members.

It also owns China's largest shipbuilding and maintenance base, the country’s most complete ship research and development resource. The corporation can design and build ships, as well as marine engineering equipment, that meet global technical standards and universal safety requirements.

The company will be the main undertaker of R&D, design, production, testing and maintenance of vessels and equipment used by the PLA Navy.

It also aims to make progress in the development of large cruise ships, LNG carriers, and ultra-large container ships in order to make China a shipbuilding powerhouse.

China has stepped up its reform of state-owned companies in recent years, encouraging industrial mergers to improve operational efficiency and boost competitiveness.