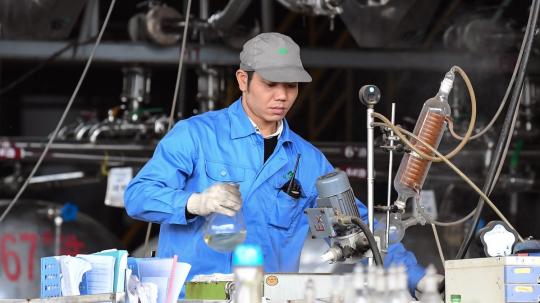 Kong Xueping said her company is more determined than ever to plant sweet wormwood after Chinese scientist Tu Youyou reaffirmed her faith in the anti-malaria drug artemisinin.

Sweet wormwood was a herb used in ancient Chinese therapy to treat various illnesses, including fevers typical of malaria.

Chinese scientists, including Tu, identified its active ingredient, artemisinin, in 1972. Artemisinin-based combination therapies were recommended by World Health Organization as the most effective malaria treatment available in 2005.

But after an unprecedented period of success in global malaria control, progress has stalled, according to the World Malaria Report 2018, which is published by the WHO. Artemisinin resistance and partner drug resistance has been reported in Myanmar, Thailand, Laos and China.

In response to this problem, Tu told reporters on Monday that after three years of research, her team found that the problem could be solved by prolonging the period of taking the medicine or replacing the partner drug.

As the manager of Xiancaotang Pharmaceutical Co, based in Rongan county in the Guangxi Zhuang autonomous region, Kong was pleased to hear the news.

With a planting area of 1,667 hectares of sweet wormwood and annual production of around 70 metric tons of artemisinin, Xiancaotang is now the biggest artemisinin supplier of the world qualified by the WHO.

According to Kong, of the 240 tons of artemisinin the world annually consumes, 200 are produced in China. Her company began to grow the herb in 2006, but she has seen a dramatic decline of artemisinin producers.

"It's easy for a company to be involved as the technical requirement is low, so in 2006 the number of producers across the country exceeded 100," Kong said.

"Companies withdrew as the profits continued to shrink. In recent years, we have seen more hope as the price has risen to 1.4 million yuan per ton, but there are only three or four companies left that produce artemisinin," Kong said.

Ninety percent of their production will be exported to India, where anti-malaria drugs are produced.

"The challenge is that we can't expand our planting the way we want to because the world's needs are being met. In this situation, the more we produce, the lower the price would be," explained Kong.

Still, the company is hopeful as new uses of artemisinin have been uncovered. The company has cooperated with Tu's team to establish a seed bank which consists of more than 1,000 sweet wormwood variety.

"We now see hope as Tu's team also found that artemisinin has a special effect in treating lupus erythematosus," Kong said. "As long as the demand increases, we are sure to have a more promising future."

Lupus erythematosus is a collection of autoimmune diseases in which the human immune system becomes hyperactive and attacks healthy tissues.