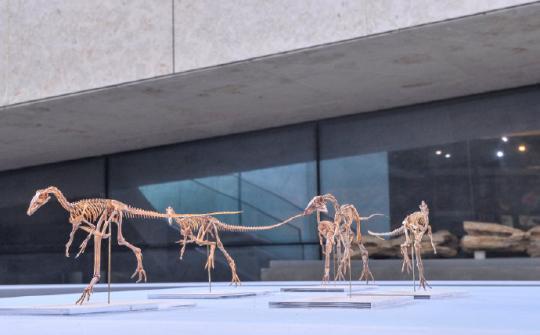 A tiny, bird-like theropod dinosaur found in North China has been identified as a new species, which will help scientists to better understand the evolution of dinosaurs, according to a research team, the thepaper.cn reported Tuesday.

The research team, consisting of scientists from home and abroad and led by Xing Lida, associate professor at China University of Geosciences, discovered the new species of the compsognathid dinosaur in Fengning Manchu autonomous county in North China's Hebei province.

Scientists have published their findings on the new species - a very small bipedal carnivorous dinosaur, in Cretaceous Research, a journal issued by the publisher Elsevier, and named it Xunmenglong yingliangis.

Once living in the early Cretaceous period, around 65 million years ago, the Xunmenglongdiffers from other family members in its physical features, including a unique combination of postcranial traits and disproportionately long lower legs.

Despite the incomplete fossil records, scientists estimated that the dinosaurs were approximately 30 centimeters in length, and had long necks, small skulls, and tiny but deadly teeth, all of which made them excellent hunters.

What's more, with the help of inherited good vision and strong rear limbs, these tiny carnivores were able to seize smaller animals, and even flying insects and moving lizards when hunting.

Presently, questions remain about its habitat preferences and diversification patterns, but the new findings will provide evidence of its co-living animals and the distribution of the compsognathid dinosaur.