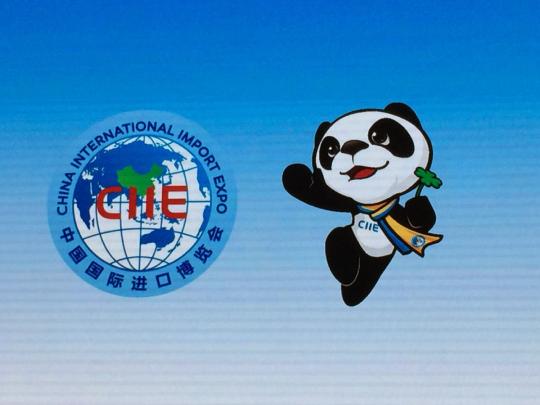 The CIIE logo and mascot Jinbao are showcased at a news conference in Shanghai on July 27, 2018. (Photo by Yang Yang/chinadaily.com.cn)

"We had a very positive experience at No 2, so we are looking forward to No 3," said Jeff Zettel, associate vice-president of Aramark Corp.

Zettel made the trip from Aramark's headquarters in Philadelphia, Pennsylvania, to attend the road show for the third CIIE at the Bank of China's New York offices in Manhattan on Monday.

Zettel signed a contract on behalf of Aramark with the China International Import Expo Bureau to participate in the third CIIE Enterprise &Business Exhibition in Shanghai from Nov 5-10, 2020. Aramark is a U.S. food service, facilities and uniform provider to hospitals, universities, school districts, stadiums and other businesses around the world.

Zettel said in an interview that Aramark's business in China is a major reason for the company's attendance. "We have approximately 35,000 employees in China today. It's a rapidly growing part of our company. And we want to continue to do business in China across the different regions."

Zettel said Aramark has strong business ties with "many companies like Huawei. We are looking forward to broadening those relationships and opening up dialogue for new opportunities in the future."

Leo Chan, executive director of the Great Cincinnati Chinese Chamber of Commerce (GCCCC), flew from Ohio to sign up early for the third CIIE. Chan said preregistering for booth space for the last two expos was hectic because of the event's popularity.

"Currently, we are still collecting inquiries from our member companies," Chan told the China Daily. "But we have already booked 150 square meters of area for exhibition for next year's event."

CIIE deputy director general Liu Fuxue said 34 U.S. companies have signed up to participate in the third CIIE "because of the great success the second CIIE achieved."

Liu said tentative deals for one-year purchases of goods and services worth $71.13 billion were reached at the second CIIE, an increase of 23 percent over the previous one.

"The expo brings huge business opportunities to U.S. companies," said Liu. There were 191 U.S. companies at the second CIIE, a significant increase over the level in the first year.

"This number illustrates that even in this hard time of the bilateral trade relationship, the business ties between China and U.S. enterprises can still not be cut off," said Gu Chunfang, commercial counselor of the Chinese Consulate General in New York.

Bank of China USA president and CEO Xu Chen said that in talking with American business leaders and participants, he is "aware that U.S. companies still give much priority to the Chinese market with enthusiasm, despite the current China-U.S. trade frictions."

"Most U.S. representatives at the subnational government levels and American businesses in the expo applauded the event," he said.