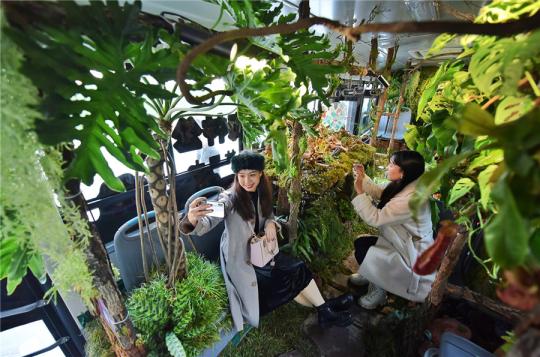 Passengers take pictures on a "forest bus" in Taiyuan, Shanxi province, on Friday. With nearly 100 types of plants in the bus, the design is intended to encourage "green" ways of travel. [Photo by Deng Yinming / For China Daily]

China's carbon emissions per unit of gross domestic product were down by about 4 percent in 2018, beating the annual target by 0.1 percentage points, an official said Wednesday.

By 2018, China had slashed carbon intensity, or the amount of carbon emissions per unit of GDP, by 45.8 percent from 2005 levels, meeting the target of a 40 to 45 percent decrease by 2020 ahead of schedule, Zhao Yingmin, vice-minister of ecology and environment, told a press conference.

The figure can be translated to 5.26 billion fewer tonnes of carbon dioxide emitted since 2005.

The share of non-fossil fuels in China's primary energy consumption stood at 14.3 percent at the end of last year, Zhao said.

Power generated from renewable energy sources accounted for 26.7 percent of total power output in 2018, according to Zhao.

"Tasked with missions like improving the people's livelihood and eradicating poverty, we will remain committed to addressing climate change and deliver on our promises 100 percent," said Zhao.

China will staunchly uphold multilateralism in implementing the Paris Agreement, said Zhao, making the remarks before the 25th session of the Conference of the Parties to the United Nations Framework Convention on Climate Change.