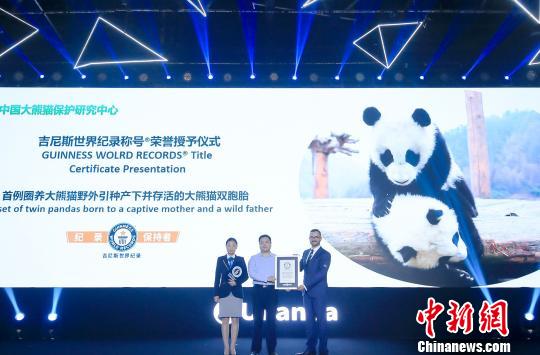 A pair of pandas receive a certificate from the Guinness World Records in Beijing, June 12, 2019. (Photo provided to China News Service)

(ECNS) -- A pair of pandas, born to a captive mother and a wild father in Southwest China's Sichuan Province, received a certificate from the Guinness World Records in Beijing on Wednesday.

The head of Guinness World Records in China said the birth of the cubs, named Hehe (harmony) and Meimei (happiness), was significant because it marks new progress in China's efforts to increase the genetic diversity of its captive pandas.

Zhang Zhizhong, Party chief at the China Conservation and Research Center for the Giant Panda, said a project to promote mating between captive and wild pandas started in 2017 and led to the birth of the cubs on July 25 last year.

Also on Wednesday, the winner of the China Giant Panda Global Image Design Competition, jointly organized by the China Intercontinental Communication Center and the China Conservation and Research Center for the Giant Panda, was announced as “A Pu,” a cartoon image of a young male panda who loves playing table tennis.

The cartoon will be widely promoted as the official icon of China's giant panda through cooperation with entertainment and sports companies and be a bridge connecting China with the rest of the world, according to the organizers.