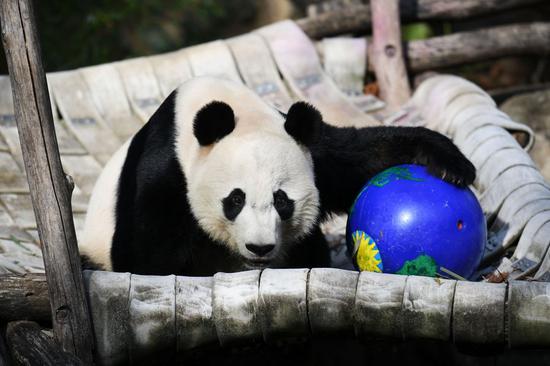 Giant pandas are a symbol of great partnership and friendship between the United States and China and the two sides' knowledge-sharing and collaboration have made a great contribution to the species' conservation, the U.S. National Zoo's director has said.

Steven Monfort, director of the Smithsonian's National Zoo and Conservation Biology Institute, made the remarks during a recent interview with Xinhua, before U.S.-born giant panda Bei Bei's departure from the zoo to China, scheduled for Tuesday.

The Smithsonian's National Zoo in Washington D.C., also known as the U.S. National Zoo, received its first pair of giant pandas in 1972 as a gift from the Chinese government to mark the groundbreaking progress made in bilateral relations that year.

The arrival of the giant pandas at the zoo, which came several years earlier than the two nations officially established diplomatic ties, "was a very important symbol," said Monfort.

"It was an opening and it was a way to increase awareness and understanding between our two countries," he said. "In my mind, I can't think of any other animal, any other wildlife species that has had such an important diplomatic position."

Over the years, giant pandas have also become a symbol for the National Zoo, as almost every visitor here comes to see the black-and-white fur balls, according to Monfort. Besides Bei Bei, his mother Mei Xiang and father Tian Tian also live in the zoo.

"They are a tremendous symbol for us," the zoo director said. "They represent the magnificence of nature, people's curiosity about wildlife and about nature."

Monfort also believes the giant pandas are bringing more attention to the nature thanks to their popularity.

"While you're here, you learn so much about all of the rest of the animals that we care for. We hope to inspire curiosity about nature and to draw people closer to nature so that they can care about it," he said.

While speaking of the zoo's cooperation with its Chinese partners, Monfort sounded very proud.

"If you think about it 47 years ago, neither country knew very much about pandas at that time," he said. "The truth is we've grown our knowledge about the giant panda working together."

The two sides are collaborating closely and extensively on the species' preservation, health, nutrition, and reproduction, while studying how climate change might impact the design of giant panda reserves and technology for tracking them in the wild, among other things, according to the zoo chief.

"It's a very extensive scientific collaboration that is everything from studying the individual animal and their health and their wellbeing all the way to understanding the ecosystems that they live in, the reserves where they live and training the next generation of professionals who will care for them and study them long into the future," Montfort said.

"We are close friends with many of these people we've worked with," he said. "I think we have excellent collaborative relationships on science, on training and we have friendships that have existed for decades. It's something that we are very proud of."

The latest census in 2014 found there were 1,864 giant pandas alive in the wild, up from 1,114 decades ago. The number of pandas bred in captivity has reached 600 globally, China's National Forestry and Grassland Administration announced earlier this month.

"It's been a big success on both fronts, on both understanding the biology and sustaining the diversity of animals in human care, but also in sustaining animals in the wild," said Monfort, adding that the population structure is very healthy, which means there will be giant pandas available to be reintroduced to the wild.

Despite the notable increase, the giant panda population remains vulnerable to threats from disease, climate change, and habitat loss.

Monfort agreed that it is imperative for the U.S. and Chinese sides to continue their productive relationship for a greater success in preserving giant pandas.

"Success means that we will have multiple free living populations that are sustaining and sustainable in terms of their reproduction and their health," he said. "We still have a long way to go before we achieve that goal. But the trends are moving in the right direction."

The currently-running cooperative breeding agreement was signed in 2000 between the National Zoo and the China Wildlife Conservation Association, initially with a 10-year term. After two five-year extensions, it will expire at the end of 2020.

Monfort said the National Zoo is "very interested in continuing this great relationship" and that he hopes discussions about how they can move forward onto the next phase of the agreement could begin early next year.

"We've been 47 years working together on giant pandas and we hope that we can work for another 50 years or more," he stressed.

Bei Bei's departure is in line with the terms of the agreement that requires all cubs born at the National Zoo be sent back to China after their fourth birthday.

Bei Bei turned four on Aug. 22. He will enter the breeding program when he reaches sexual maturity between five and seven years old.

Monfort said they are sad that Bei Bei is about to leave because the National Zoo has built a special relationship with him.

"Our animal keepers, they quite literally fall in love with these animals. But they also know that he plays a very important role in conservation. So we're quite proud that he's going to play that role," the director said.

"If I could speak to him, I'd say: go forward and be a good sire, have many offsprings, be healthy and help contribute to the future of giant pandas in the wild," he added.