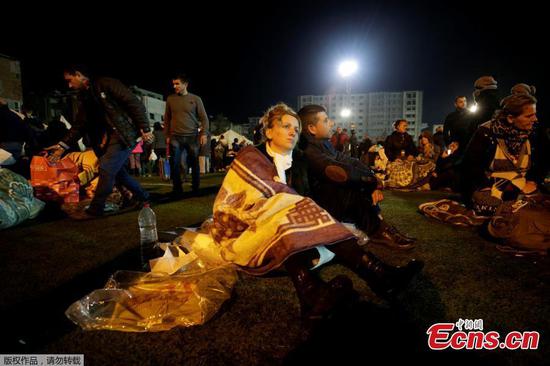 People sit outside after an earthquake shook Albania, November 26, 2019.(Photo/Agencies)

The death toll of the disastrous earthquake which hit Albania on Tuesday morning climbed to 21, and rescuers continued hunt for survivors, authorities said on Tuesday evening.

The earthquake, measuring 6.3-magnitude on the Richter scale, hit Albania at 3:55 a.m. local time and demolished buildings, apartments and hotels in the port city of Durres and nearby town of Thumane.

According to Albanian Defense Minister Olta Xhacka, as of 6:30 p.m. local time, there were 21 victims, whose bodies were recovered from the debris in the affected areas.

"This was the strongest earthquake our country has experienced since 1979 and it was accompanied by 250 aftershocks," Xhacka said.

According to the Ministry of Defense, over 600 people were injured and taken to hospital.

Speaking to reporters at 8:00 p.m. local time, Albanian Prime Minister Edi Rama said that the number of people rescued under the debris in Durres and Thumane reached 44 people.

According to Rama, the death toll might rise in the hours to come due to the fact that there are still people under the debris, hoping that they will be rescued alive.

Earlier, the Albanian government declared Wednesday as an official day of mourning and the Albanian flag on official buildings will fly at half-mast.

The Ministry of Education, Sports and Youth informed that classes are cancelled in all schools across the country for Wednesday.

Camps with tents were set up at the stadiums of Durres and Thumane, which will serve as shelters to the local residents whose homes were demolished or damaged.

In an interview for local media News 24, Albanian seismologist Rrapo Ormeni said that Tuesday's earthquake is one of the 55 strongest earthquakes that hit the country.

Albanian rescue teams in Durres and Thumane were joined on Tuesday by over 200 civil emergency experts from Italy, Greece, France, Turkey, Croatia, Montenegro, Romania, and the United States.