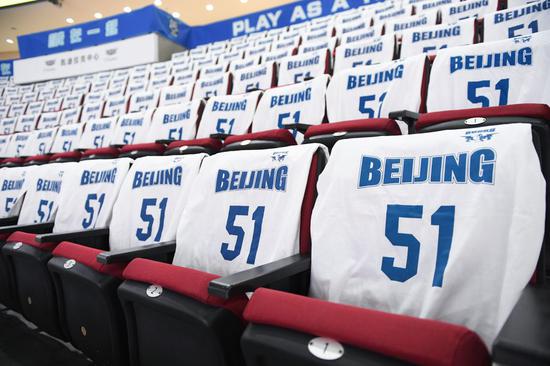 A 51-numbered T-shirt is put on the back of every seat inside the Wukesong Arena on Dec. 8, 2019. (Xinhua/Ju Huanzong)

After Taruike Jianiyou earned the Beijing Ducks' first goal against the Shenzhen Aviators on Sunday night, the music resounded inside the Wukesong Arena, but its "owner" could never hear it again.

This Chinese Basketball Association (CBA) league match was almost all about Ji Zhe, a former basketball player who won triple CBA titles with Beijing. Ji died of a lung cancer early on Thursday.

A 51-numbered T-shirt was put on the back of every seat inside the 18,000-capacity Wukesong, the basketball venue of the 2008 Olympics located in western Beijing. It was Ji's jersey number during his more-than-a-decade spell in Beijing.

A special plate was set up through corridor of the arena. Surrounding Ji's No. 51 jersey were cards of fans' message to Ji.

"Hopefully basketball will be with you in the heaven," a fan wrote on the card.

One-minute silence tribute was paid to Ji before the match. Many fans were seen weeping on the stand.

A video of Ji's career highlight was played during the interval. Words of "Forever No. 51" and "Fighting for you" were seen on the screen.

With Ji's photos shown one after another in a dimmer arena, fans switched on lights on their cellphones, forming an ocean of light in memory of Ji.

"He was a fighter who was fighting every moment on the court. That didn't change after what happened to him until the last moment," recalled Beijing's head coach Yannis Christopoulos.

Then he pointed his left forefinger at the sky. "The fight is up there," said the Greek.

"It was the toughest period for me and my players since I coached this team. It was very difficult to manage our emotions and feeling," admitted Christopoulos.

"I want to say to his son that he has to feel proud of his father, because his father is a strong man and a warrior."

Ji left his beloved basketball and the Shougang family. But he will be there, indeed.